bikesrv is a server to measure the output of an exercising bike and make it available via an API.

Ok, you know exercising bikes. That thing that looks like a bike, but doesn't move. You use it when you want to get in shape.

Some of these bikes have an output signal that is fed to a small computer with a large display across a cable and a mini-jack. The display then shows your speed, virtual distance etc.

Turns out that this mini-jack just fits into the audio in of a stock computer. This is where bikesrv comes into play. It analyses the signal from the bike and computes the bike's speed.

The final step is a built-in web server in bikesrv. It makes the current speed is available through a simple HTTP API.

You could do all sorts of analysing and feedback that an ordinary bike computer does.

But it is much more fun to turn the exercising bike into a game controller. 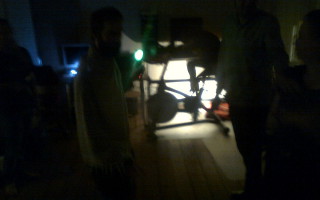 What is the HTTP API?

The server will listen on port 1805. If you call

you will receive a text/plain response that contains the current number of revolutions per second.

Unzip the file, then at the command line run

On the command line, run

To read the API documentation, open a shell / DOS window, navigate to the bikesrv directory, and run

You can create a HTML version using

Releases are currently not signed, as I am transitioning from PGP to a different software.